Home > Fishing Articles > Squid Fishing Tips and Techniques - By Chris Ferkin
Keen Whakatane Fisho Chris Firkin has spent the past 3 years doing a fair amount of work in Australia, over this time he has seen a revelation take place relating to squid fishing, which if taken seriously here could see a whole new fishery discovered all over the country. Chris shares with us some of the techniques, products and trends taking place in Aus right now. 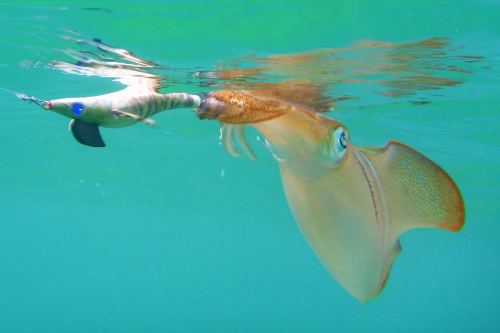 Squid fishing is not new to NZ, particular areas like Leigh wharf in the upper Hauraki gulf, New Plymouth, islands like Great Barrier, Mokohinaus, White Island and the Tauranga harbour all at certain times of the year see a lot of these tasty alien like creatures from the deep. I’m sure there are many other potential hot spots yet to be discovered, which is what makes this fishery so exciting. If you haven’t tried eating fresh squid - you really have missed out on something special, as squid (calamari) rates up there with scallops & crayfish, it is truly delicious!

Brief history of Japanese EGI (squid lure in Japanese) A few years back (about 300 seriously) the Japanese while fishing observed squid holding on to small pieces of drift wood. This got one fisherman thinking; he shaved a piece of wood into the shape of a prawn, attached a coin to the belly and placed a number of small hooks to the rear of his creation. This proved deadly on squid and instigated the start of what has now become a massive market all around the globe.