Home > Fishing Articles > Bluenose Fishing Tips - CaptainCol
Bluenose fishing is always deep, but when they spawn the bigger ones do come up a bit shallower. The best way to catch Bluenose is Jigging, as when you find the fish, the jig goes down faster and straighter than baits do, and they are not as influenced by tide as baits are. The bigger the Jig the better. Always use a large assist hook, no longer than 4 to 5 inches. The best assists for deepdrops is a good large circle hook to give a good hookup. I like the heavy Duty Mustad Demon Circles. And always put a 10cm Skirt on the hook for bottom jigging as it encourages the fish to go straight for the hook, making hookups instantaneous. I normally use a 1200gr jig, although 800gr is still OK. the lightest you would ever use for bluenose would be 400gr. (Bigger the better) and to be fair, you can make your own out of an old chromed chair leg, cut each end at 45 degrees and jamb it full of ball sinkers (or pour hot lead in). Make it about 400mm long, and drill a hole in the top to attach to your split ring. Then attach your assist with skirt (I prefer pink or gold) The size of the jig, makes them keen as mustard, and they will follow it to the bottom, and will attack the assist as soon as you start winding.
Another good jig I like is the Catch Squidwing 500gr, as I fish over 400m it needs extra weight attached to speed up the process of getting it down, I use a Catch Joker 500gr attached on top of the Squidwing, but you can use any jig in your arsenal for that use, from 300 to 500grams, just depends on the depth you are fishing. The Talica 50 is my current deepdrop Jig rod.

Bass and Puka are also suckers for jigs. You will also find that as a rule the person on the boat using Jigs will catch the bigger fish than the bait fisherman. As the larger fish are not as easily fooled with bait and prefer something moving. I have plenty of first place wins in comps to prove my theory! Another thing to remember is that large bluenose spend most of their life really F___ken deep. The deepest one I caught was 1000m (one thousand Meters) was about 40kg's and every scale was blown out when he arrived at the surface. So if you want some whoppers, don't be shy to put it down in 600 to 800m when you find a really deep mound. And lots of you have electrics now, so do some exploring in the abyss and surprise yourself. (PS. i do still hand wind, I have a jigging master PE20 with 1100m of 100lb braid on it, My fishing buddies often use electrics, but I'm never far behind them on the wind and my average fishing depth is 450m.
Go catch some bluenose!!! (below is my jigging effort from 01-04-2017)

If you like bluenose fishing, but still prefer bait, then that is fine, they love squid. Use a 32oz or bigger sinker and a couple of size 12/0 or 14/0 circle hooks. Bluenose will generally hit your bait instantly, if you have managed to drop into the fish. Your trace should be a minimum of 300lb and as many swivels in the trace as you can get away with, If you make your own traces, use sleeved crane swivels, as bluenose love twisting up the gear, and if you don't have enough swivels, they can twist the trace to the point of breaking before you land your fish.
Bluenose like a frequent undersea ridges and mounds, and corners on seamounts that have steep faces that create up-wellings that produce the feed for them. And you will generally find bluenose in the same basic area's year after year. Although there are certain times a lot better, like during February when they are in Roe (off Gisborne then anyway) at which time the big boys from down deep come together to spawn. 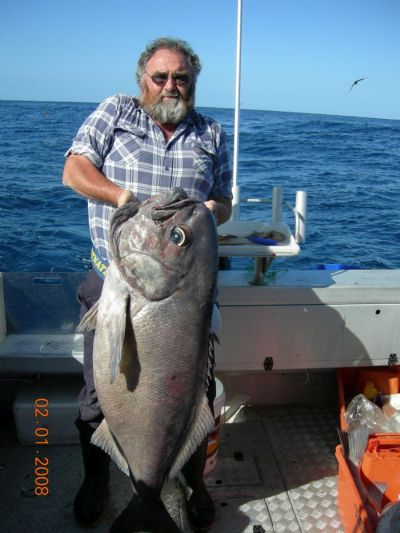 Here's a nice 37kg Bluenose caught by Nick destounis on "RAMOE" in January 2008 off the Kotonui's during the annual Toko fishing comp.

On the east coast of the north island the Bluenose spawn in January, February and March. This is the time of year when the larger fish present themselves in a more palatable depth for the ardent angler. Other times of year these large fish reside in depths down to 800 to 1000metres.