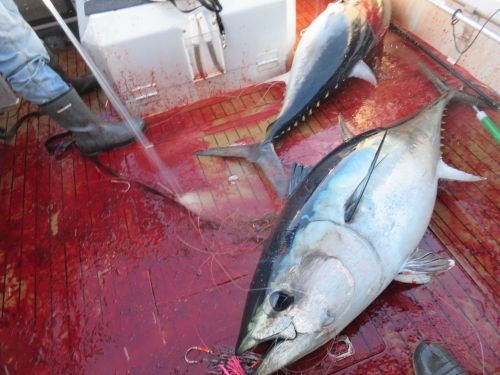 The Southern Bluefin roll through the waters off Gisborne every year from about beginning of May till end of July.
They can be caught just outside the ledge and out to the 2000m (depth) contours, there are paces that they generally hold up for a while, Like Tuahine High, and they also hold for several weeks just on the southern edge of the Ranfurlies. Now and again they will run in a bit closer and have been caught in earlier years on South rocks area. So it is always worth having a look a bit closer in than where you may expect them. the temperature band that you will find Southern Bluefin Tuna in (off Gisborne) is anywhere from 14.4C to 16.8C. The first wave of fish (which are normally a bit smaller) are best found in 16.4C and the later run of the bigger fish (around 150kg) are more likely to be in the 15-15.9C water. As a rule the bigger fish come through in waves behind the earlier small Bluefin
On the 18th of June 2017 Graham Ballard, Myself (Colin Kerr) and Craig Johnston headed out on Grahams boat "RAMOE" with the sole intention of catching a Bluefin. We took no bait and no bottom-bouncing rods, we were 100% committed to a full day of trolling, no matter what the outcome.
We set off at 6am and headed straight east towards Tuahine High, We first deployed the lures just outside the ledge and trolled east till we ere on top of Tuahine High. the bird life at the high was phenomenal, there was also lots of groups of seals and it wasn't long before we were seeing large schools of fish from 20 to 40m deep. After 1 and a half hours on the high, we hadn't managed to raise any fish even tho we were convinced they were there. Our mate Tassy (Graham Dowsing) and Julie were there also trolling, so we left them to it and headed 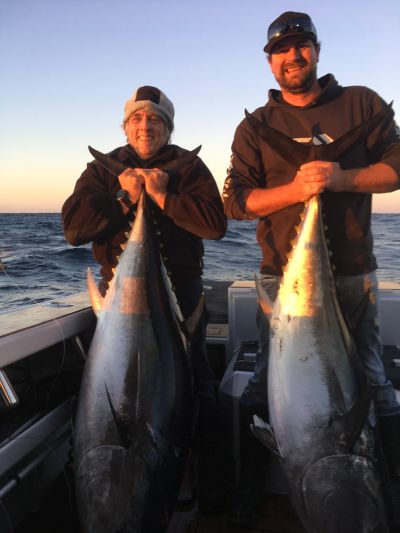 north. Graham and Julie ended up with a slight mechanical issue that sent them home early, so they didn't manage to raise the fish either.
As we headed North we still still saw sporadic bird life, and a few groups of seals, and we were mainly checking the 2000m contour. Up off the Gables we decided to go in a bit toward Gable Ridge. We were starting to see significantly more seals now, and in groups upto 6 or more. Seals are always a good sign that you are in the right place for Bluefin, as they eat the same food source.
as we were coming up onto Gable ridge we had a group of 4 seals start porpoising behind our lure (for 3 or 4 minutes), We took that as approval of how well our lures were running as if, they thought they looked like food, then so too should any bluefin.
The day was dragging on now at 3.30pm when 2 reels started screaming, it was time to take up battle stations, Craig started bringing in gear, Graham snaffled the first rod, I squared the boat up and took the second rod. And it wasn't too long before we had the first 2 fish on the deck.
The spread we had out was a real mix & match as you normally do when trying to find the fish, We had a pakula crystal, a zuker 3.5 abortion, a moldcraft std widerange, a rapala, a Black Bart and one of Tassies lures.
We sorted the deck and turned around heading back for where the first 2 fish struck, Just before I started to turn back onto the mark I told the boys to keep ready as we were about to hit the spot. Just as I said it, we were all watching out the back and saw 4 fish come half out of the water and monster the lures, Graham and Craig grabbed a rod each and started dealing to the fish, there was another 2 rods still pealing off line. The wind was still beam on so I carried on maneuvering the boat to put the wind behind us, then i pulled it out of gear and grabbed one of the other 2 rods that were still going off, as there was only 3 of us, we had to leave the forth fish to it's own devices.
Craig got his fish to the boat relatively quickly and took a double wrap of trace, at that point the fish decided he didn't like us and took off, and Craig couldn't flick the trace, he gave a little squeal as the line broke. Craigs would have been the biggest fish of the day, as it was markedly bigger than the rest that we landed, Next one in was Grahams, to followed by my next fish. We now had 4 Bluefin on the deck. The other fish decided he didn't want to wait for us and parted company taking a set of hooks with him, He left us the now hookless moldcraft tho. Lessons learned. We may have lost a couple of fish, but we had just landed 4 Souther Bluefin Tuna and it was time to head home. The biggest of our 4 Bluefin on the day was 72.5kg

The Southern Bluefin fishery off the east coast of New Zealand is actually a 5 Month fishery that has not really been tapped into recreationally, Although it will be different from now on, as after we caught the above fish, everyone got keen and then John Lifton-Jones mentioned on FB that the fish were currently close in at Waihou Bay in beginning of July and then the madness set in, and many anglers managed to get their bluefin experience done and dusted.
The Fish start showing up just south of the Madden Banks in early April, then they are off Mahia in Early May, off Gizzy May, June, July and Waihou late June, July and early August and end up at North Cape by end of August. So you have a really big window of opportunity to get out there and chase these beasts, And they taste really good too. So if you missed this years bluefin Bonanza, then make sure you are ready for next years.

There are also Northern and Pacific Bluefin Tuna that cruise our coast from Mid February till June each year, So next year we will put some effort into these beasts as well, and there are several models around the 300kg mark, so looking forward to mid feb 2018. 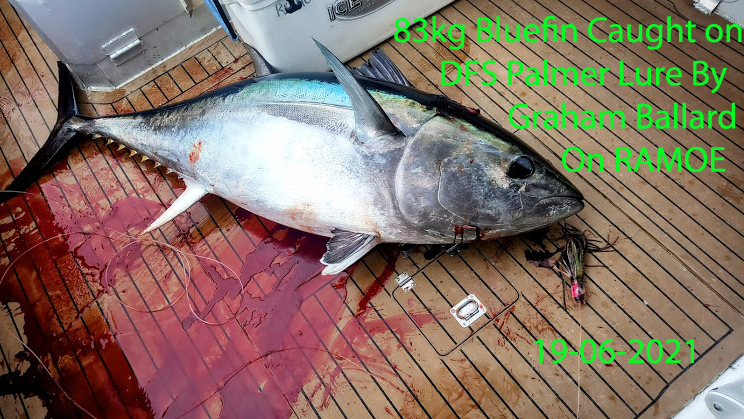